From the heart of the village Platania, 3.700 meters of accessible and often well-kept, wide dirt road lead to the parking area, just before the river’s bank, where the need to use a car ends. Since the above mentioned dirt road is at some points, especially during the last kilometer, quite steep and has many closed turns, it is recommended to drive slowly and carefully. Right after the plateau, a large and heavy stone bridge, serves as a starting point of the acquaintance with this unrivalled monument of nature’s grandeur, offering two basic choices which both end at the famous Mouth.

To the left of the bridge, following the initially tranquil flow of Neda, you can cover a distanve of 600 meters among huge stone formations, the wall of the ravine that are sometimes narrow and other times wider, walnut trees, wild fig trees, kermes oaks and hazels, balancing on smooth rocks, moss, lichens, hydrophilic and aquatic shrubs, while enjoing the sound of beautiful koleoptera and of sizeble, colorful dragonflies that challenge your skills in photography. Almost sixty meter before the last waterfall, and a few meters before the Mouth, the water rises up to the chest, even during August and September, when the flow is lower, and some careful swimming may even be requaried.

Alternatively, the touristic “beaten truck” is in any case an excellent acquaintance with the ravine and the river. Right after the bridge (built probablyaround the end of the 18th century, the first written proof is dated in 1881), and following the informative signs pointing to the right of the small fork at the beginning of the small path, towards a food stand serving all things necessary (water and soft drinks for the return), a medioum difficulty fascinating hike begins, at least for the novice city dwellers who would like to enjoy more walking in their daily lives. The path, moving along the river’s right bank, sometimes made of dirt alone and other times by improvised wooden or stone steps, is sunken in the vegetation, sparsely allowing generous views of the impressive ravine.

To our left, a firm wooden rail protects the largest part of the path, adding to the safety of a passage, which is anyway an effortless walk. It takes 15 to 20 minutes, depending on your mood, physical state and “appetite” for photographs, to reach the first waterfall to the left. At this precise point, the first shockingly beautiful image of Neda, overwhelms the senses and makes you pause, until you became fully aware of a scenery that a few minutes ago you knew nothing about. A small and safe bridge made of iron combined with wood, blends harmoniously with the natural environment, an exquisite open pool with blue-green cool water inviting you to immerse yourself in it, and a seven meter long first waterfall that appears through the lush vegetation. On the preceding small stone plateau (offering shadow in the mornings), a small stop is recommended to catch your breath.

It is said that this icy-cold rapid stream, the tributary, the smaller ravine of Neda, is the ancient Lymax, the stream where Rhea was bathing, and somewhere around the area lies Eurynome’s shire, the goddess with the human body and the fish tail, with her statue protected inside the stracture, bound by golden chains. Having just given birth to Zeus on Mt. Lycaon, afraid that he would have the same tragic fate and be eaten by his father Cronus, Rhea gave the infant to Neda the Nymph, who bathed it and washed his hair at the fountainhead of Lycaon, and then protected and raised him together with Theisoa and Hagno. There is no more fitting place in the entire Greece for this exquisite myth…

A small walk after the first waterfall, a slightly more steep part of the ascending path is divided into two directions. To the north, predominates the second waterfall, a wonderful double jet cascade. In front of it there is an equally alluring pool, larger in diameter from the first, which attracts the most swimmers during the summer months. To the left, as the vegetation is significantly decreased and the view to the ravine becomes even more impressive and clear, a narrow path passes by the small church of Kimisis Theotokou and ends right next to a big and imposing monolithic formation which hosts a modest carved hermitage.

As this part of the route is the most exposed to the rays of the sun before, during and after noon, and as most people visit it during the summer months, a pause for rest under the shadow of the rock by the hermitage, or in the cool interior of the temple (with the lime washed stone and a few icons), a hat and a bottle of water, are probably necessary to everyone. This is in brief the acquaintance of the travellers to Neda’s ravine… a true life experience.

If you go back to the  small wooden bridge and look to your right this time, a little lower, to the strong rope that was installed there to assist the visitors to pass the river’s bank and enter into a fairy-tale world. Standing by the third waterfall of Lymakas mentioned above and looking ahead, the walls become narrower and almost vertical, while next to the entrance of the Mouth the water is so deep that sometimes you have to swim. As you pass from the light to the shadow and the semidarkness, you realize that your eyes try to become accustomed with an irregular, extremely beautiful cave with a length of 80 meters approximately up to the exit. Water drips from the ceiling, pleasantly and rhythmically, and as you arrive almost to the middle of the cave, a small opening on the ceiling allows the sun rays to enter, when the sun is already high enough. The sound of the mystical enclosed space, this sublime music of the water, is multiplied by a small waterfall and to the right, a small piece of land is ideal for rest after swimming in the cold rapid waters, as well as to prepare your gear, if you attempt to capture some nice pictures from the inside of the Mouth. This imposing room hosts many different and harmless creatures. Small crabs, hundreds of bats hanging from the walls of ceiling, and even some wild doves observe lazily the comings and goings of humans, an exit which going against the river’s flow, demands that you travel light, have good swimming skills, or even wear a life-belt. After the Mouth and about a walk of almost 35 minutes you will reach one more step-like waterfall, before Neda and its ravine open up, calm down and flow into fields and cultivated lands, until they meet the Gulf of Kyparissia and the Ionian Sea. 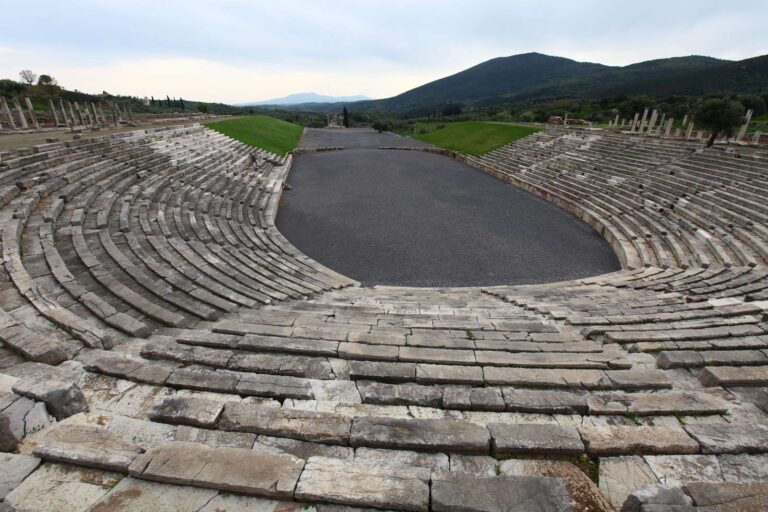